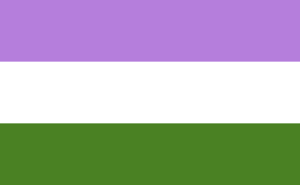 Genderqueer (GQ) is an umbrella term for non-binary gender identities, as well as an identity in its own right. As an umbrella, it includes identities such as: bigender, agender, third gender, genderfluid, and many more.

This article is a stub.
You can help SJWiki by expanding it.
Retrieved from "http://sjwiki.org/index.php?title=Genderqueer&oldid=7939"
Categories: