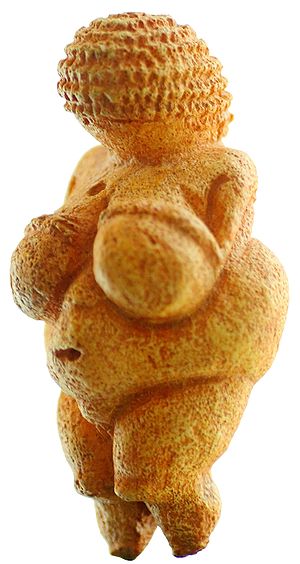 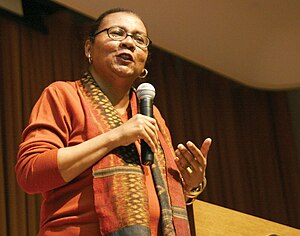 Woman is an extremely broad umbrella term for a gender, role, and identity. There are roughly two meanings of woman: the self-concept individual-level identity; and the social-level coercive grouping under patriarchy.

"Woman" has different meanings depending on the system or level of analysis one uses to study humans; it can mean:

One argument is the "penis is male" argument. Which is the argument that our gender/sex is defined by the organ which we are born with or the organ of which we are in possession.[2] This gender essentialist definition can be used as an argument to erase trans women's right to womanhood until they have undergone surgery to align their genitalia to match the sex with which they identify. This is also often used in trans community by some people to create an atmosphere of some people being more or less trans than others.

Another argument is the "XX is Woman" argument. This refers to the chromosomes that are a medical definition of birth sex. This argument is flawed as in order to accurately use chromosomes to define "woman", everyone would have to undergo a karyotype test. Most cis women will assume that they are XX based on this definition of "woman", despite never undergoing a karyotype test.

The following list of sex chromosome anomalies will often be assigned "Woman" at birth without a Karyotype, due to the presence of a matching sex organ:

Many people will have one of these conditions go undiagnosed due to a lack of severe symptoms.

See the main article on this topic: Sexism

Using gender essentialism, as in the first definition above, to exclude people from the latter definition of gender as a self-concept, is deeply problematic. Confusing the two, or accepting the first as the only truth, is part of the cause of the gender pay gap; and transmisogyny, misogynoir and their intersection: transmisogynoir; and sexism in general.

See the main article on this topic: Patriarchy

Under patriarchy, which enforces strict gender essentialism, infants are assigned as female based on the presence of a vulva at birth. After this birth assignment, children are then coerced into wearing gendered clothing and employing gendered mannerisms by society (parents, etc.). In the case of a child designated a woman, a femme gender presentation will be expected of them. By the same token, anybody who passes as a woman, chooses to present as femme, who behaves in a way society deems "female", and/or is perceived to be a woman, will be met with varying levels of gender policing, misogyny, femmephobia, etc. This violence is significantly increased towards trans women and other trans feminine persons.[3]

In the patriarchy, all assigned female at birth (AFAB) people are women, and all women are AFAB. If a non-AFAB person is a woman, or an AFAB person is not a woman, their identity is marginalised and/or erased as gender essentialism rejects gender as a self-concept. Of course, genital organs are not visible in the overwhelming number of social interactions, meaning that gender is by definition "diagnosed" by external appearance (e.g., gender presentation, secondary sex characteristics, etc.) in a cisnormative society.

As such, "woman" is an essential identity that is purportedly grounded in biology and does not allow for much flexibility. The gender binary, gender essentialism and cisnormativity all stem from the belief that gender in humans is defined by organs present (or modified for intersex people) at birth. That is to say, women in patriarchy are assigned "female" based on their reproductive organs by a doctor. Following the classification into a binary gender at birth, AFAB people are coerced into complying with a gender role, with identifying with the label girl, and woman, and all the trappings of a sexist system, various forms of shaming and catch-22s. Intersex people also are forced, often at birth by surgery and then by socialisation, into a binary gender.

Specifically, "women" as a concept are seen as, and expected to conform to, a stereotypical gender role. This stereotype is composed of many facets, including roles and identities such as: caregiver, docile, sexually neutral (i.e., neither asexual, nor promiscuous), sexually objectified, mother, cisgender, white, emotional, femme, and so on. Transcending these stereotypes in any way can gain one the label of unladylike, tomboy, etc.

Nonetheless, many AFAB people reject these norms, often completely subvert them, and occasionally even change the world through their lives and feminist activism. This being said, cis women, often do not question their assigned at birth gender identity. However, some do, and some even attempt to reclaim/redefine the word "woman" to be more inclusive (i.e., to be a self-concept), while checking their cis privilege.

Despite cisnormative and heteronormative pressure, AFAB people can be gender variant and/or trans. Trans men, who are assigned female at birth, are usually well aware of their subversion of normative standards set out for them and their bodies. Gender variant AFAB people who do not clearly fall under the umbrella of either cis women or trans men (in the eyes of the patriarchy), can have a multitude of other trans, genderqueer, non-binary identities. All these people have been assigned female at birth, and so under patriarchy will face some level of oppression be it in the form of misogyny, transphobia, dyadism, binarism, or another intersection.

Assigned male at birth people, i.e., trans women and other trans feminine and non-binary people, will be subject to sexism, transmisogyny, femmephobia and other intersectional oppression to various degrees depending on how much they are perceived as feminine and/or present as femme. Trans women are subjected to a great deal of intersecting oppression because of the way woman is defined and how rejection of masculinity is viewed in patriarchy. Because of the way society violently enforces gender essentialism with transmisogyny, if a trans woman is "discovered" as being trans, e.g., if she has a penis and this fact is made public, she is subjected to degendering, assault, and even murder. Trans women's gender self-identity is taken from them, and parts of their body are labelled as "male" as part of an effort to police gender.[2]